I am the Infantry.
I am my country’s strength in war, her deterrent in peace.
I am the heart of the fight – wherever, whenever.
I carry America’s faith and honor against her enemies.
I am the Queen of Battle.

I am what my country expects me to be – the best trained solder in the world.
In the race for victory, I am swift, determined, and courageous, armed with a fierce will to win.

Never will I fail my country’s trust.
Always I fight on – through the foe, to the objective, to triumph over all.
If necessary, I fight to my death.

By my steadfast courage, I have won 200 years of freedom.
I yield not – to weakness, to hunger, to cowardice, to fatigue, to superior odds, for I am mentally tough, physically strong, and morally straight.

I forsake not – my country, my mission, my comrades, my sacred duty.

I am relentless.
I am always there, now and forever.

LAST MONTH
In our last article, we focused on the organization and the maneuver formations of the light infantry platoon.  In doing this, we covered all the blocks which make up the platoon. That included the individual Infantryman, the fire team, the rifle squad, and the weapons squad.  As we highlighted, each element is only as good as the smaller units that it is comprised of.

THIS MONTH
This month’s article will expand on the foundation from our last article. We will focus on one principle area.  This is the maneuver techniques available at the squad and platoon level.  Although our focus is at the small unit level, these techniques are applicable at all levels.  That is why we will dedicate the entire article to this topic.  With this base we can then focus the following month on some specific situations in which the platoon will be exposed to during maneuver.  These include crossing danger areas and how a platoon reacts to contact.  Let’s move out!

Manuever Techniques
We went into great detail on maneuver formations in our article.  However, many times we hear the terms maneuver formation and maneuver techniques used synonymously. They are not the same, but they are certainly complimentary to one another.  The combination of formation and technique are the building blocks which create maneuver.

A commander has three basic maneuver techniques to select from.  These are traveling, traveling overwatch, and bounding overwatch.  So how do you select a maneuver technique?  As always, the factors of METT-TC (Mission, Enemy, Terrain and Weather, Troops and Support Available, Time Available, and Civil Considerations) will drive the decision.  Within these, the overriding criteria will be the Enemy (more specifically, the likelihood of enemy contact) and Time Available (more specifically, how much time you have to get from point A to point b).  The three techniques will vary mainly in relation to control, dispersion, flexibility and speed.  Again, you will always consider the likelihood of enemy contact. 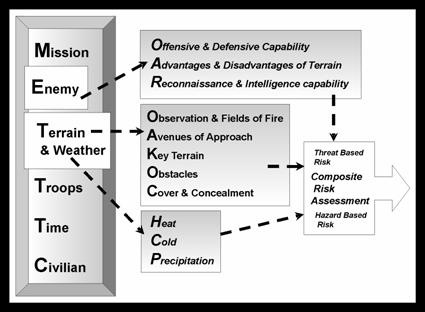 The Factors of METT-TC – Always Critical

Below we will begin to dissect the maneuver techniques available to a Squad Leader or a Platoon Leader.  (Again, these techniques are applicable to all unit levels) We will start our discussion by providing a synopsis of each of the maneuver techniques – traveling, traveling overwatch, and bounding overwatch.  Each has its own distinctive purpose and a unit must be able to execute any one at anytime.  They must also be able to seamlessly shift from one technique to another.

Traveling
When contact with your opponent is highly unlikely and speed is a requirement, then a commander will generally select the traveling technique.  Within traveling, the unit as a whole maneuvers simultaneously. Because speed is critical; it is likely that subordinate units will be in a column formation to assist in achieving this.  When comparing traveling to the other techniques, several characteristics step out.  First, and most obvious, is that it generates the most speed.  It allows for more control for a commander than traveling overwatch, but not as much as bounding overwatch.  Finally, it has the least security and the least dispersion among Soldiers than the other two techniques.  Again, you are sacrificing security for speed in the traveling technique.

Bounding Overwatch
The final technique available to a commander is bounding overwatch.  It is utilized when the commander believes contact is expected.  Within bounding overwatch, there are two varieties – alternate and successive bounds (we will address each momentarily).  As the name implies, in bounding overwatch there will be elements conducting maneuver and those who will support the maneuver in support by fire positions.

As highlighted above, the critical variable in bounding overwatch is terrain. You need terrain that assists the maneuver element and terrain which benefits the units providing overwatch.  Obviously, the overwatch elements need terrain that provides several things.  First, it must be in a location to truly support by fire the maneuver by the maneuver element. In other words, it must provide good observation and fields of fire.  Second, it must be where it will be difficult for the enemy to observe them and consequently, not be able to place direct fires on them.  In other words, it should provide good cover and concealment.  Selecting this terrain on the go is a challenge.  What may look like good terrain from a map or even an aerial view might not be the same on the ground.  Also remember that during a mission terrain changes to.  Things like vehicle movement, weather, indirect fire, etc… can certainly change the landscape.

Earlier, we talked about the two types of bounding overwatch – Alternate and Successive Bounds.  Let’s get into more detail below:

Alternate Bounds – Bounding Overwatch
In alternate bounds, units essentially play leap frog (not a tactical term!) with each other.  Let’s explain:  As the unit begins maneuver, one element will maneuver forward while the other element provides overwatch in a stationary position. The maneuver element will find terrain forward where it can occupy a support by fire position.  Once the element is set, the original overwatch element will begin maneuver and maneuver (bound) past the unit now providing overwatch.  This unit will then find terrain to provide overwatch, set, and then enable the trailing unit to bound past them.  The unit continues this sequence – Bound/Set/Bound as the tactical situation dictates.

Successive Bounds – Bounding Overwatch
The big difference in successive bounds is that units do not leap frog past one another.  Instead they pull up abreast of each other.  Once they are both stationary, the unit that was initially stationary will then maneuver forward and then occupy a support by fire position.  This back and forth normally continues until enemy contact (remember you utilize this technique when enemy contact is likely) or if you switch to another maneuver technique.

Let’s address a couple of questions related to the techniques.

Could you use all three techniques in a single mission?
Of course.  Depending on the length of the operation and METT-TC considerations, it is highly feasible.  A unit may begin using the traveling technique early on when enemy contact is highly improbable and speed is of the essence. As the unit progresses, it may determine that likelihood of enemy contact has increased.  Consequently, the commander changes his maneuver technique from traveling to traveling overwatch for added security.  Finally, as he approaches his objective or receives reports of enemy activity forward, he may very well shift to bounding overwatch.  Any commander who does not consider these shifts is obviously sacrificing speed and security at some point in the mission.

How do you use formations and techniques together?

First of all, any of the above maneuver techniques can be used with any of the formations we addressed last month. Of course, many formations are more conducive to a particular technique than others.  For instance, if you are maneuvering in a column; you may utilize traveling to assist in facilitating each.   Trained units will shift among formations and techniques during a mission.  These shifts are of course, METT-TC dependent.

Before we illustrate how a squad or platoon would execute the above techniques, we need to address the two key components in any type of overwatch – the base of fire element and the bounding element.  They clearly go hand and hand and set the conditions for maneuver when enemy contact is possible or likely.

Base of Fire Unit
At first glance, this may appear to be a fairly straightforward assignment. After all, how tough is it to throw some lead downrange.  However, there is far more to this in order for the base of fire unit to be successful.  First of all, you must quickly find terrain that is conducive to achieve your task.  Obviously, time is critical here.  Every minute you spend determining positions is time that can detrimental in enabling the bounding element to maneuver to the location they need to go to. As we addressed earlier, the terrain should provide the ability to place fires where they are needed to support maneuver.  It also should provide the base of fire elements with cover, concealment, and security.

The base of fire element must understand several key direct fire principles.  First, they must understand what their role is.  Sometimes it may be to simply suppress enemy forces.  Other times, it may be more focused on the destruction of enemy forces.  Second, the base of fire element must define sectors of fire for its’ weapons.  It is not effective to have every weapon fire in one particular area, when a wider area is needed.  Third, this isn’t a “wild minute” of unconscious firing.  There should be a purpose on where rounds are going and Soldiers should be aware of ammunition conservation. Put these altogether and the base of fire element will be instrumental in the success of the bounding unit.

Bounding Unit
There are few situations more unnerving than being part of a bounding unit knowing that enemy contact is highly likely.  It is the combination of this likely engagement and maneuvering in unfamiliar terrain which ratchets things up.  With that said, there are things that the bounding unit can do which will aid them tremendously.  These include:

Maneuver Formations/Techniques Graphically Depicted
Below we will show some graphic representations of both the squad and platoon in maneuver techniques.  We will also include some points of emphasis.  Let’s start with the squad.

Let’s provide an example of how a Squad Leader may lead his Soldiers in bounding overwatch:

A Squad Leader will want to ensure all his Soldiers know the following:

Let’s provide an example of how a Platoon Leader may lead his Soldiers in bounding overwatch:

NEXT MONTH
In our next article, we will once again focus on light infantry platoon maneuver.  This time we will key on how the platoon meets the challenges of crossing a danger area.  Tied to this we will dissect how a platoon deals with contact.  Contact can come in many variations, not just direct fire engagements from your opponent.  We will look at the seven forms of contact a platoon can be exposed to.