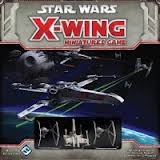 Failed Basic: Some rules are just silly. Ships need some tweaking to conform to their film counterparts. Expensive to build a fleet.

This was Jak’s first mission in an active combat zone. He and the other two pilots in his squadron waited 10,000 kilometers above a huge gas giant. His Tie Fighter was the left escort for Captain Torbin’s Tie Advanced. Another pilot, Lt. Jeron, was flying far left cover in his Tie. Suddenly, their scanners picked up the targets they’d been waiting for—two rebel fighters closing fast. One was an ancient Clone Wars–era Y Wing, old but still formidable. The other was one of the newly acquired X Wing fighters from the Incom Corporation. Awhile back, the designer of the X Wing, a rebel sympathizer at Incom, had arranged for his own disappearance and the transfer of this new fighter to the rebels. Now, the Empire was paying the price for his defection. If this ambush went well, however, the rebels would be down two pilots and two fighters.

Captain Torbin ordered Jak and Jeron to pin down the X Wing, while Torbin made quick work of the Y Wing. The X Wing pilot was good but not as good as the pilot of the Y Wing. While Torbin closed with the older Clone Wars–era fighter-bomber, the X Wing took long range hits from both of the Tie Fighter pilots. The pilot of the Y Wing got a solid hit on the Tie Advanced. It changed its axis of flight and increased its speed. Jeron made a mistake, overshot the X Wing from its port side; it twisted and blasted him into space dust.

Jak, meanwhile, slowed and rolled his Tie into the X Wing’s 6 o’clock. Three hard hits from Jak’s lasers crippled its shields as its pilot tried to escape. Jak hit the X Wing with another full blast at point blank range, and his target exploded. Torbin twisted his fighter and blasted the Y Wing but missed. He then executed a half loop and ended up at medium range on the Y Wing’s tail, but the skilled Y Wing pilot punched all power to the engines and jumped to light speed. The battle was over. Jak felt the adrenaline shaking his body. He had survived his first combat and taken out an X Wing. Jeron was dead but, Jak thought to himself, “Better him than me.”

So went one game of Fantasy Flight’s new Star Wars X-Wing Miniatures game. The core set comes complete with three highly detailed miniatures of two Tie Fighters and one X Wing, plus a shuttle craft. A well-illustrated instruction book and other play aids are also included, along with counters to represent asteroids. The components are all very high quality and will last for many, many game sessions. Additional minis have already been released and include additional Tie Fighters and X Wings plus the venerable Y Wing and the deadly Tie Advanced (better known as the Tie fighter style flown by Darth Vader in Star Wars Episode 4). Future expansion packs will include the A Wing, Tie Interceptor, Boba Fett’s Slave 1 and Han Solo and Chewbacca’s amazing Millennium Falcon. Players hoping to build a large squadron of fighters, however, better have deep pockets; each ship costs between $12 and $30.

The game itself is very similar to the style perfected by the Wings of War/Wings of Glory system, which will allow players familiar with that system to quickly learn this one, but the game is also different enough to provide them a whole new experience. (Nexus Games in Europe originally published Wings of War, with English-language editions distributed by Fantasy Flight Games; the current edition, Wings of Glory, is published and distributed by Ares Games.)

Each fighter comes with a stand and base. In addition, each fighter type has a unique maneuver dial associated with it, as well as ship cards that list specific pilot skills to be used with that type of ship. Pilots range in skill from generic, basic, right-out-of-the-academy flyboys to medium-skill veterans and legendary pilots such as Luke Skywalker and Darth Vader. Upgrade Cards are also included for special weapons and features that may be purchased from a point pool to add to the ships. These special cards include droids like R2D2 and may help repair damage or add special weapons such as proton torpedo ordinances.

Each star fighter is rated for primary weapon attack value, hull points, shields (if any), agility, and add-ons, plus ratings based upon what pilot card the player has chosen.

Game Play in the Star Wars X-Wing Miniatures Game
First, players plan the moves their star fighters will perform by picking a maneuver and speed setting from their ship’s maneuver dial. Then the ships move in ascending order based upon the skill of each fighter’s pilot. Pilots with the lowest skill rating have to move first; the highest-skilled pilots move last. The players take the appropriate maneuver template (a cardstock piece showing the speed and maneuver that the ship will perform) and put it at the front of the mini starfighter. The mini is moved to the end of the template, ala the maneuver-card style movement in Wings of War/Wings of Glory. After all the ships move, the players may attack with the highest-skill pilot shooting first. The longer the range of the shot, the greater the chance that the pilot will miss. In a unique system, each ship is rated for the number of attack and defense dice rolled. The trick is for the attacker to score more explosion pictures when rolling attack dice than the number of evasions the defender rolls on defense dice. If the attacker rolls more hits than the defender rolls evasions, either damage cards are drawn and assigned to the hit ship or the target ship takes hits to its shields, until the shields fall. There are chances of critical hits, which can ruin even the most skilled pilot’s day. The X Wing and some other fighters have shields that can protect the pilots from becoming space dust, but pity the poor pilot of a Tie Fighter, which has no shields, so any hits go directly to the ship’s hull rating.

Tactics available to the players include “Acquire a Target Lock,” “Barrel Roll” and “Evading.” Some pilots may direct other pilots in order to help their teammates acquire target lock-ons for more deadly attacks. Counters are provided to keep track of lock-ons, shields, pilot stress and other pertinent bits of information.

Games can be free-form combats, or players may pick from one of three missions. Sadly, no rules are included for campaign games. Fortunately, an index is thoughtfully included in the well-organized rulebook, along with detailed and informative designers’ notes.

Something Missing There Is
The system does have some issues that detract from game play. I found ridiculous the rule that states when a fighter flies off the game table it is considered “destroyed.” Why not state that a fighter that leaves the game table has either escaped from combat or precipitated the moving of the playing pieces towards a specific direction on the table to make more room for maneuvers?

Additionally, there are situations the rules don’t address adequately or they ignore completely. While the game has some very nice-looking asteroid counters, the rules for avoiding asteroids seem tacked on and do not in any way capture the nail-biting feel of the asteroid-field chase in The Empire Strikes Back. This should have been caught and addressed in play testing.

Why not include rules for mine fields or for fighting in a planet’s atmosphere? These likely could have been simply and elegantly handled with one additional page of rules and would have allowed a greater flexibility in the system. Solitaire rules could have been incorporated into the system as well. Also, if a play mat or map sheet had been included it would help add to the feel of flying in space instead of just pushing minis on a wooden table.

Some of the ships’ stats seem to be a little different from their on-screen counterparts, specifically in the area of speed. I think the X Wings should have been a little faster if an option was made for balancing weapon power with energy allocated to speed. This same system could have been adapted to boosting shield power and shield directions.

As it is, the Force is with this game, but the Force could have been stronger had Fantasy Flight spent a little more time developing the Star Wars X-Wing Miniatures game’s potential. Maybe they needed Yoda working on this project.