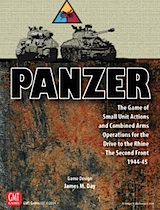 Failed Basic: Solitaire scenarios and smaller unit scenarios would be nice. Still no modular terrain as was in the original release.

The Germans held the high ground. The three 50mm PaK38 anti-tank guns, one 20mm anti-aircraft gun plus two squads of dug-in infantry were supported by an eight-wheeled PSW 234/4, an armored car armed with a devastating 75mm L/46 anti-tank gun. The 234 was fast and packed a deadly punch but one good hit could take it out. The crew maneuvered the 234 into a hull-down position on the southwestern slope of the hill. Being hull down may give it a chance in the upcoming fight, the commander explained. Scouts had found a small American armored column in the distance that had broken through the bocage and were heading deeper inland. In the distance, three American Sherman tanks could be seen. Suddenly, a jabo broke through the clouds—an American P38! The 20mm flak gun belched its shells at the plane in its pattern of boom, boom, boom … In quick succession, two of the PaKs were suppressed and another one was knocked out. Then the Shermans opened fire and all hell broke loose! The three Shermans included a version armed with a 105mm cannon for taking out soft targets. Soon all of the PaK38s were silenced. The crew of the 234 realized that this could be the fight of their lives; they were ordered to hold the hill and hold it they would! Then things evened out as the 20mm FlaK gun damaged the P38, which broke off its next strafing run and flew for home, its left engine belching smoke. The 234 knocked the track off one of the Shermans as it tried to cross a gully, but the other two closed in on the German position—their guns firing all the while.

So started one play-through of the new expansion to James M. Day’s Panzer series, which has been redesigned and re-released by GMT Games. Panzer and its companion games, Armor and 88, were the best of the best of tactical war games in the 1980s when they were originally released by Yaquinto Games. Now the games have been re-designed, streamlined and brought up to date, but Panzer has kept its highly tactical feel—it plays more like a miniatures game than a game using counters and flat maps.

Panzer Expansion 3 builds on to the series by moving the action from the Russian Front, covered in the core game and its first two expansions, to the Western Front during the turbulent years of 1944 and ’45, after the June 6th D-Day landings. The Allied armies have begun to break out from the Normandy beachhead and are driving through bocage country towards the Reich. While the original Panzer is needed to play the scenarios in this expansion, Expansions 1 and 2 are not needed to play this set.

Upon opening the extremely heavy box, the player is treated to a reference and scenario book, a book detailing the organization of British, American and German divisions in ’44 and ’45, sixty-five double-sided data cards, five counter sheets and four 10” x 27” geomorphic maps.

Each double-sided data card provides individual information on the vehicles and troops who were ground-pounding it in France during  ’44 and ’45; almost all troops and equipment are covered, including several ground-attack aircraft. The most common unit is the Sherman tank, which is covered in a dozen different American and British configurations. Almost as many variants of the venerable Panzers III and IV are also included.

Many different support vehicles are provided, including SdKfz 250 and 251 halftracks, anti-aircraft guns and tanks, Allied halftracks and armored cars plus trucks. The ground-attack airplanes include P38s, P47s, Hawker Typhoons and Mosquitos. Infantry is not neglected and neither are anti-tank guns and artillery.

Some of the exciting and/or unique units included in this expansion are the 2cm Flak Zgkw 8-ton halftrack, the flamethrower-armed Flammpanzer 38(t), the Grille 33 and the Jagdtiger on the German side. The Allies have the Comet, the M18 Hellcat, the 90mm-armed M26 and M36, the Sherman Firefly and the Churchill Crocodile flamethrower tank.

Each data card is literally filled with information on a unit’s speed, armor, weapons, defenses (rated by angle of armor and the accuracy), and the penetration and stopping power of their main and secondary weapons.

New rules are provided for paratroopers and glider-borne forces as well as staggered initiative and the special terrain found in France, including the dreaded bocage. Also, rules are added to accommodate artillery airbursts and the effect of the explosion on troops in forests.

Nine new scenarios are provided and, since each unit is given a point value, new scenarios can be created in minutes and balanced out.

The Table of Orders and Equipment (TO&E) booklet provides organization, staffing, and equipage of British, American and German units found on the Western Front. It is very informative and of great use for balancing out the formations in player-created scenarios.

The only things missing from this expansion are rules for creating balanced solitaire play and the modular terrain found in the original games that allowed for modifying the map boards. Additionally, I wish that the designer had included some smaller scenarios of about an hour or so in length, as most of the scenarios take 2 hours or more to play.

GMT has promised the next release in this series will be Main Battle Tank, which covers modern combat. Additionally, we can expect 88 (World War II in North Africa), and Israeli Defense Force to be re-designed and released in the next few years. This reviewer can hardly wait! 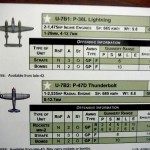