Posted on May 25, 2018 in Electronic Games, Front Page Features

John Tiller Brings the Battles in the Middle East to Your Android. Computer Game Review.

Failed Basic: limited number of scenarios, frustrating time limits on some scenarios, can only play the Israelis on the Android game, no “help labels” for the buttons on top of the screen, no way to take back a move

Middle East 67 covers the wars for Israel from 1956 to 1973. You, as the Israelis, must coordinate infantry, armor, artillery, engineers and air strikes in order to fulfill the mission requirements of the scenario you play. There are 14 scenarios which can take from 1 hour to 3 hours to play.

The game loads and plays easily. Using your phone’s touch screen, you can easily zoom in or out of the map screen, touch units to show their statistics, order your units to move or fire as well as call in artillery support and air strikes.

Each hex on the map is 1 kilometer across and each turn represents 3 hours of time. Weather and hours of the day are represented so visibility drops depending on conditions or time of day. Each hex is rated for % of elevation, visibility, supply, buildings present, obstruction present, etc.

Each unit is a battalion, company or platoon and each unit is rated for number of men or vehicles, combat strength for assaults, ranged combat both against hard targets or soft targets, range of attack, defensive strength, movement speed, weight of units (important for moving across bridges or fording rivers), morale, current casualties, whether they are in or out of supply, etc.

The range of units reads like a history of armored and air warfare. Since this game covers from the 1950s to the 1970s, you start with Sherman tanks and Super Shermans while the armies of the Arab forces have cast off British and Soviet World War 2 tanks. As the years progress, so does the technology. The Israelis get access to M48s, Centurions, and the French AMX-13 (fast but not hard hitting – send them behind the lines to hit the Arab HQs and artillery batteries but keep them out of tank on tank engagements). Air units also include everything from Gloster Meteors in 1956 to Dassault Super Mystères and Mirages.

Aside for the touch controls for movement, attacking, etc, the game has buttons on the top of the screen which control whether a unit is in transport mode or deployed mode, control of reinforcements, engineering tasks such as repairing or destroying bridges, clearing a path through mine fields, calling in air support, highlighting supply lines or lines of command and control, initiating close assaults, etc. There are so many different commands that it can become a little overwhelming – but primarily you will use the close assault, engineer, transport, call air support and reinforcement buttons the most. An on-line manual can be called on to walk you through the options. A touch sensitive “help text” function would be a nice addition as, at times, I look at the button and ask myself “what does this do again?” In addition, a “re-do” move option would be welcome for future updates. Also, it is too easy to lose a scenario in progress if you hit the “start new” button. A “are you sure?” safety selection would help with this issue.

Over a dozen scenarios are available covering battles from the fifties to the seventies. Some can be played in less than an hour while others can take three or more hours to play.

Evocative sound effects accompany the action but they can be silenced if you need to. The air attacks are accompanied by the scream of jet engines and the sharp retort of anti-aircraft guns. Tanks clank and men march. This game has great atmospherics! A nice feature is that you can mute the sound on the game so you don’t have to worry about the sound of explosions causing a panic when you’re playing while waiting in a line at the grocery.

Attacking is easy. Touch the unit to bring up a cross hair and then touch where you want it to attack. For calling in artillery, touch the artillery unit and then touch its intended target. If a unit can’t spot for that particular artillery, the game will tell you.

When you are finished with all of your units, you can end your turn and the computer takes its turn. Your units don’t just sit there when the computer does its thing – they react and fight back! You can use the “2X” button to speed up the computer’s turn so if you have a big scenario, you don’t have to wait for 10 minutes while the computer blasts you to smithereens.

The AI is very challenging and well programmed.

Aside for only being able to play the Israelis, my other biggest complaint is that some of the scenarios don’t give you enough time to complete them before they end. Time and time again, I’ve been about ready to take an objective when the scenario comes to a conclusion and I lose! This may be realistic but it is very, very frustrating and it seems to be a problem across the range of Tiller’s games. In addition, it would be nice if Tiller built in a “take back a move” function as it is easy to move a unit incorrectly using the touch screen.

Middle East 67 really helped me understand the tactical situation during these wars. Currently I’m playing the final few battles of the 67 War and am trying to take the Golan Heights. It calls for very different tactics than, the huge tank battle I had fought last week in the game.

This game is fantastic! Now I want to get the full computer version which covers much more than this Android game does. 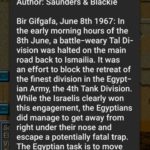 Arab tanks on the move