Categories Menu
Home » Boardgames » “First you get the money…” Business is War! 1846: Race for the Midwest Game Review

Posted on May 31, 2017 in Boardgames, Front Page Features

“First you get the money…” Business is War! 1846: Race for the Midwest Game Review

Failed Inspection: None. From a component and rules standpoint, this is a very well executed game.

Ever wondered what it must be like to live the hard life of a corporate president? Sure, they make bank, but really, how hard could the job be? The job basically consists of “Sell more widgets! Cut costs! Keep the shareholders happy!” Easy, right? Well now you too can share the experience of leading a major corporation by playing GMT Games 1846: Race for the Midwest!

This is ostensibly a game that pits players against each other as they build competing railroads from the Eastern United States to connect with the emerging markets of the American Midwest. But that façade conceals the true game – a game of unfettered, no holds barred capitalism in which the player who acquires the most personal wealth wins. To play 1846, get ready to step into the shoes of the corporate titans who forged the iron and steel arteries across the American heartland and amassed huge fortunes in the process.

The quality of the components in 1846 is first rate. Thick cut, heavy duty cardboard terrain tiles depict various twists and turns of railroad track used to connect destination cities. Full color cardboard token markers mark the depots of the major railroads used in the game using the colorful heralds of each company. A deck of small game cards are used to track minor companies and the stock shares of the major railroads. Lastly, a well-designed deck of ‘funny money’ is provided to fuel the financial transactions within the game.

There are a number of railroad-building games on the market. 1846 stacks up favorably against its competition in providing a game in which players start a railroad, lay tracks, buy trains and generate revenue to continue the cycle. However, what makes 1846 a unique, enjoyable challenge is the need to step outside your typical game experience and really think like a 19th Century robber baron or a modern-day financier. Use your wealth to found a company and buy stock. Operate the company to maximize shareholder return. Use the profits to found another company. Invest in your rivals so you can profit from their success! Drive up the price of the stock share by issuing dividends to increase the value of your holdings. All these activities are the core of the decision-making cycles furthering your quest to have the biggest pile of cash when the game ends. This is truly a case of ‘he who dies with the most toys, wins’ because, to quote Ricky Bobby in the movie Talladega Nights “If you ain’t first, you’re last!”

The heart of the game is a simple, three-step turn sequence – First comes a stock round with players taking turns buying and selling shares of stock, or founding new companies (a form of buying stock), followed by two identical operating rounds. During operations, each railroad — with its majority stock holder (President) making all its decisions — lays track and stations, runs routes, declares dividends, and possibly buys newer – bigger – and exponentially more expensive trains. Players that plan poorly when it comes to replacing their trains can get caught short and forced out of the game.

The mechanics of both the stock market activities and operation of the railroads leads to a complex waltz of decision points and actions that in some ways replicate the challenges of a modern chief executive officer, but without the baggage of government regulation or pesky labor problems. Just focus on making as much money as you can. The game rewards players with good math skills and an eye for logistics as matching the right trains to the right routes will help maximize profits. Buying the latest and greatest train does no good if all your railroad runs are a couple of short routes.

Players can take the approach of building a small, highly profitable company and funnel the profits to the shareholders. Alternatively, a player may opt to build up a corporation and then loot its treasury and leave it a withered husk that collapses in bankruptcy. Even better, by clever stock manipulation, a player can loot a company, sell his stock and leave another player holding the bag to deal with the fallout. Or choose a conservative diversified approach and invest in many of the companies and let the other players do the hard work!
The semi-random nature regarding the distribution of private companies means it’s unlikely that replay of the game will be boring or exact. There are a few constants – for example a player founding the Illinois Central is almost a given as the IC has substantial advantages in terms in laying it’s initial route and will likely mean it’s always quickly brought to play.

There’s very few minor negatives to say about 1846. The paper currency is fiddly and the denominations mean you spend a lot of time ‘making change’. Many regular players of the 18x series games switch to poker chips which apparently will speed play. Mastering the layout of the railroad corporation card took most of the game before all the bits of information began to click. The card itself is slightly undersized if you expect it to hold all the company information such as trains, stock and corporations. We just let the excess cards accumulate on the table next to the corporation board.

The game is unforgiving of bad financial planning. Setting the initial stock price for the first two players was a bit like stepping into a minefield. No one was clear what constituted the most effective set point. In our play through we had occasions where the mandatory purchase of trains caught some players short and tossed their plans into a cocked hat. In the final phase of the game the explosive growth and revenue generation depleted the available cash in the bank faster than we expected and caught at least one player with a substantial amount of cash in the company treasury that he wished he had the foresight to distribute as dividends to further enrich himself. Neither of those events are the fault of the game, but rather the inexperience of the players. At the end of the game, all four of the players in our review enthusiastically supported scheduling another 1846 session.

For being a notionally historical game set in the United States there are a couple of oddities that we can chalk up to being a game. It’s as if the game exists in a semi-historical vacuum. While starting in 1846 and culminating in trains from the 1930’s, the game pays little to no direct attention to the impact of external historical events such as the American Civil War, various financial panics, and the emergence of organized labor. The breakup of the railroad trusts is hinted at through a mechanic that phases out railroads owning private companies, but it comes on indirectly with no sense of the socio-economic forces driving the event.

We can bicker that these events are all subsumed within the effects of the operating rounds of the various phases, but the game feels slightly generic in not capturing the feel of functioning within the ebb and flow of the history of the United States of the 19th and 20th centuries.
It may well have come down to a design decision. Imparting the veneer of economic-political-social influences as additional dimensions in the game model would likely slow the game down for little practical return on game play. When you’re playing the game you don’t worry about these minor points. You focus on what’s important – how to make more money than any of the other players. 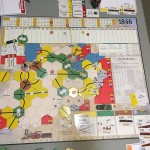