Special Note:  Guy Gibson, the commanding officer of the raid, had a black Labrador retriever, named what is now an offensive racial slur, generally referred to as the “N-word.” This word appears fully articulated in the game. The dog’s death the night before the raid plays a part in the game as a morale factor for the crews. Anyone offended by the use of this word in its historically correct context should not purchase this game.

Enemy Coast Ahead: The Dambuster Raid is an interesting and educational solo board game with strong story elements. The game simulates Operation CHASTISE, the Royal Air Force’s attempt to destroy Germany’s industrial might with one blow by destroying several hydro-electric dams in the Ruhr River Valley, Germany’s manufacturing heartland.

On the evening of May 16, 1943, nineteen Lancaster bombers of the Royal Air Force’s Bomber Command flew from their base in Lincolnshire. The bomber’s targets were several hydroelectric dams in Germany’s Ruhr River Valley, the country’s industrial heartland. The mastermind of the raid, engineer Barnes Wallis, stated: “If their (the dams) destruction or paralysis can be accomplished, they offer a means of rendering the enemy utterly incapable of continuing to prosecute the war.”

The bombers carried special bombs, codenamed “Upkeep.” The bombs were designed to bounce over the anti-torpedo nets that protected the dams and then backspin down the face of the structures and explode about halfway down.  The concussion of the blast would fracture the dams and the water would then rush through the breach, destroying them.

Two of the five primary targets, the Möhne and Eder dams, were breached. The flood killed between 1,200–1,600 civilians and military personnel, and power was cut for some hours, while the reservoirs’ water level was severely reduced.  This was by no means a decisive blow against the German war machine. Eight of the nineteen bombers did not make it home, a 42% loss rate. The game challenges the player to do better.

The game comes with one 22″ by 34″ map, a 46-page rule book, a scenario book, two six-sided dice and several player aid cards and charts. There are 35 one-inch counters, representing the 19 Lancaster bombers of the attack force, ground crews and flight waves. There are also 264 five-eighths inch counters representing the aircrews of varying quality, the bouncing bomb ordnance, status of the planes, and so on.

Fresh from the box most of the components are the typical high quality that GMT Games productions are noted for: good, thick cardboard, well-printed and easy to read. The exception is the map sheet, which should have been made out of solid cardboard stock as well, like the counters, but instead, while admirably large and easy to read, is printed on glossy paper stock.

Game Play
Enemy Coast Ahead comes with 10 scenarios: five attack (one each for the Mohne, Eder and Ennepe dams and two for the Sorpe dam) and four flight scenarios (Diversionary Force, Main Force, Airborne Reserve and All Flights), and one campaign scenario. Attack scenario number five, the Ennepe Dam raid, acts as a tutorial for the larger and relatively more complex scenarios. In the campaign game, the player starts in March 1943, organizes and trains 617th Squadron and commands them through the actual raid.

The time scale of the game depends on which turn the player is in. A planning turn is two weeks long, a flight turn is one hour long and an attack turn is seven minutes long. The unit scale of the game is individual planes and crews.

At first look the game appears to be more than a bit daunting in its complexity, but fear not, the rules are well-written and the game may be played mostly from the map with the charts and cards. After going through just a few scenarios, this reviewer rarely had to refer to the rulebook. Further, the game is intensely process-driven, meaning that there are very many separate and individual actions that must be taken in specific order for the game to progress through each turn. But again, each process is not overly complex and all are easily done in a step-by-step manner.

The campaign scenario is the most interesting part of the game. In it the player must build 617th Squadron from the ground up: gaining and distributing the limited resources available, organizing the training of the crews, preserving the security of the operation and so on. For example, the player must decide on how much reconnaissance to perform. Too much recon alerts the Germans, yet too little leaves the airplane crews without sufficient knowledge. Overall, the level of detail is impressive. For example, the player may choose to quarantine the airbase and even to transfer a barmaid to protect the secrecy of the attack, but there are consequences to such actions. Of course, each decision on these actions drives the narrative of the game.

On a side note, it was certainly refreshing to see a wargame that includes a serious look at the requirements of the training and planning elements of war, most of which take place before the first shot is fired, even before the first airplane leaves the ground.

Sadly, the surly hand of fate takes too much charge through most of the game play. Even when the player seems to have taken all the proper actions, merely drawing the wrong chit can wreak their best-laid plans. This can be intensely frustrating for the player.

The Bottom Line
Enemy Coast Ahead: The Dambuster Raid is a difficult game to sum up.  The game would certainly interest those players looking for a deep simulation of RAF bomber operation during World War Two. Also, any gamer that likes a strongly narrative-driven game would also find it worthy of a look. But for the mythical average player, Enemy Coast Ahead, at a hefty $55.00, might just be one dam too many.

About the Author
Patrick Baker is a former US Army Field Artillery officer, currently a Department of Defense employee. He has degrees in Education, History and Political Science. He cut his war-gaming teeth on Squad Leader and Victory Games’ Fleet Series. He bought his first PC in 1990, a Wang PC-240, specifically to play SSI’s The Battles of Napoleon (much to the annoyance of his wife). He has an article in January’s Sci Phi Journal. His website is: https://bakerp2004.wordpress.com/ 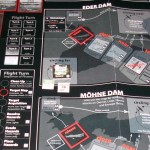