On April 18, 1942, just over 4 months after the Japanese attack on Pearl Harbor thrust the United States into World War II, 80 American airmen led by Lieutenant Colonel James H. “Jimmy” Doolittle inspired a nation by flying 16 B-25 bombers off the deck of the U.S. Navy aircraft carrier USS Hornet and conducting a daring raid on Tokyo, the enemy’s capital city. Now, 73 years later, Congress has honored these men with the Congressional Gold Medal, presented to the Raiders in Washington D.C., April 15. Leaders from the House of Representatives and the Senate presented the Congressional Gold Medal on behalf of the American people to the Doolittle Raiders at the U.S. Capitol Visitor’s Center Emancipation Hall.

“We want to thank Congress for enacting and presenting the Congressional Gold Medal to the Tokyo Raiders this day,” said retired Lieutenant Colonel Richard E. “Dick” Cole, one of the two surviving Raiders. “We are honored to accept this prestigious and most appreciated award.”

After the Washington, D.C. presentation ceremony, the medal was flown on a ceremonial flight in a restored World War II-vintage B-25 in the care of Brian “Bear” Anderson, the Doolittle Tokyo Raiders Association Sergeant-at-Arms (doolittleraider.com), and brought to Wright-Patterson Air Force Base, Ohio, home of the National Museum of the U.S. Air Force, on April 18. Later that night, the two remaining Raiders, Dick Cole and former Staff Sgt. David J. Thatcher, presented the Congressional Gold Medal to the National Museum of the U.S. Air Force, to be housed in the Doolittle Tokyo Raiders B-25 exhibit. 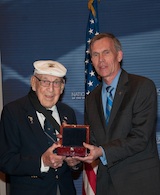 “Seventy-three years ago today David Thatcher and I, along with 78 fellow flyers took off on a mission that was based on trust in our leader – James H. Doolittle,” Cole said. “Ten years ago today the surviving Raiders put their trust in the decision of appointing a new guardian for our silver goblets – the National Museum of the United States Air Force. Today, April 18, 2015, Dave Thatcher and I find ourselves putting the Doolittle Raiders’ trust once more in the hands of the director of the National Museum of the United States Air Force. We proudly hand over our Congressional Gold Medal to Lieutenant General, retired, Jack Hudson, who we trust will respectfully guard it and have it securely displayed in the Doolittle Raider exhibit for the world to see and appreciate.”

The Doolittle Raid, which took place before the Air Force became a separate service, not only motivated a nation during the darkest days of World War II, but also proved that strategic airpower is necessary for global reach and the joint fight.

“The actions of these brave Airmen altered the course of World War II, and put our nation on the glide path to where we are today,” said General Janet C. Wolfenbarger, the commander of Air Force Materiel Command. “It is absolutely an honor to play a part in this well-deserved tribute for a tremendous group that we proudly claim as predecessors to our Airmen of today.”

The medal is displayed at the museum, rotating near the Raiders’ 80 silver goblets, only two of which remain upright. The Raiders said they hope the Doolittle Exhibit educates the younger generation, and Thatcher had advice for current and future Airmen. “Be prepared for anything you run into – we weren’t,” he said. “Learn everything you possibly can, and be good at it.”

Both Cole and Thatcher spoke of the raid and their fellow crew members with fondness and twinkling eyes, all with an undercurrent of humor and humility. “Tonight’s affair couldn’t have been planned more accurately,” Cole said. “As I remember, the mission was over, it was Saturday night, on the 18th of April [1942] and about this time, David Thatcher was on the beach in China saving the rest of his crew, and I was hanging in my parachute in a tree.”

With only 158 Congressional Gold Medals ever awarded, the Raiders are in the company of men like former President (Gen.) George Washington.

“The Congressional Gold Medal is a testament to the heroic achievements and lasting impact of the Doolittle Raiders,” said Representative Mike Turner. “We want you to know that the United States of America is forever indebted to you, for not only the sacrifices and valor you displayed that day, but also for how you have shared and honored the legacy of our veterans it is an example of unwavering commitment to service by the men and women in uniform to our nation and to each other.”

When the Congressional legislation authorizing the gold medal passed and was signed into law last year, the Tokyo Raiders’ Association’s Brian “Bear” Anderson who spearheaded the effort for the Raiders to receive this historic recognition sent this “thank you” to Armchair General: I would like to thank Armchair General and its many readers for their help and support in promoting information via the magazine and online articles with regard to the Doolittle Tokyo Raiders and obtaining the Congressional Gold Medal for them for their historic accomplishment. This long overdue honor to the 80 brave U.S. Army Air Forces airmen is now a reality.”

Top image: Doolittle Raiders retired Lt. Col. Dick Cole and former Staff Sgt. David Thatcher pose with the Congressional Gold Medal after it arrived at Wright-Patterson Air Force Base, Ohio, following a ceremonial flight on board the B-25 Panchito April 18, 2015. The medal is on display in the museum’s World War II Gallery in the Doolittle Raid exhibit. (U.S. Air Force photo/Will Haas)