Failed Basic: Rules are over written, needs a more complete index, needs a “fast start” rule book to ease players in to the game, needs more flexibility for planning invasions or other major events, conflict cards need different backs to differentiate between Axis and Allies

Hitler’s Reich is GMT’s new strategic level World War 2 board game whose scope of play encompasses the British Isles, all of Europe and North Africa and the Middle East.  Each turn is comprised of multiple impulses in either 6 months or one year.  The game starts in April of 1941 and ends before or during 1945. At the start of the campaign game, Hitler controls much of Europe and some of the Mediterranean.

There are no counters as you would find in a traditional war game.  Instead there are disks which represent areas controlled by either the Axis, the Western Allies or the Soviet Union.  Hexagonal markers represent fortifications and long wooden markers represent Axis or Allied navies controlling the bodies of water.  A white wooden counter represents where a battle is occurring.

The attractively designed mounted map board is marked with both land and sea areas.  Some areas such as Switzerland are neutral and can’t be controlled by either side.  Some areas such as Spain and Turkey start out neutral and may either join the Axis or the Allies depending on what happens in the game.  Some areas are marked with symbols showing that they are production centers and these are important to either hold on to or capture as I will illustrate in this review.

At its core, Hitler’s Reich is a card game with area control as its goal.  The players play Conflict and Event cards trying to overcome each other and then a die roll is made and modified by the Conflict and Event cards.  The final score of this die roll represents whether the Axis or Allied player wins or loses the conflict and then the winner puts their control counter on the area.  It’s that simple at its core!  That’s how you can play the entire war in Europe in 2 to 5 hours!  But the rule book makes the game look much more complex than it actually is.

The 24 page Rule Book is well illustrated and contains plenty of examples but it is so dense that I’m afraid the target market for this game will be alienated after flipping through it.  It desperately needs to be unpacked and reorganized.  After reading about 10 pages of it, I still didn’t understand exactly how the game mechanics worked so I resorted to watching a video of how to play. In addition, the index is in the Play Book and is incomplete.  This is one case in which having a Quick Play Book would immensely benefit this game.  You could cover quickly and succinctly how to start playing the game in the Quick Play book then reference sections in the Rule Book for more complete information.  I have heard that something like this is in the works and I hope it’s true.  This game really deserves more positive attention but it’s let down by a rather dense rule book hence my score of only 90% for this fine game.

As I’ve previously stated above, Hitler’s Reich is a very simple game to play once you figure out what the Rule Book is trying to say.  It’s a very innovative system which does away with complex counters and allows the gamers to focus on pure strategy.

The turn sequence is as follows (reprinted from the Rule Book):

The player whose turn it is does the following, in order:

that are not under Allied Control

The player whose turn it is:

may be able to take a further Bonus Action or Actions

the End of Year procedures

Play continues with successive game turns until the 1945 year

ends, or until an end point is reached per the selected game

option, when Victory is adjudicated, unless one player wins

Sudden Death Victory or concedes victory to the opponent.”

The flow of playing Conflict and Event Cards at each other in an attempt to get to a final result which will be modified by a die roll, creates an enticing back and forth game play style in which the players must pay attention at all times.  No sitting back and waiting for the other player to take his or her turn.

There are different types of actions which can take place each phase – Reorganize your forces which effects your cards, Fortify a territory, Reinforce a land area in an attempt to acquire a “big push” marker which allows for a massive invasion such as D Day or place a fleet in the sea area to help with amphibious invasions or support land troops, play an Event Action, or Attack your enemy to try and take a territory.

The more territories you control, the more Conflict Cards you get to add to your hand each phase.  If you gain control of an industrial zone, the other side’s hand size decreases and yours increases.  If the other side has less than 3 cards it can draw each turn it may lose the game.  There are many and varied ways to win or lose the game and half the fun is trying new strategies to win each time.  The game is very free form and a great deal of fun either solo or multiplayer.

The factions included are the Axis, the Russian Allies and the Western Allies.  Up to four players can participate but for many, the real treat will be the solo rules.  Two complete sets of solo rules are included in the Play Book. One set is a variation of the hat switching that many war gamers are used to in solo playing most games.  The cards make it easier as the cards add “fog of war” in to what the non-player side is doing.

The second set of solo rules use a flow chart “bot” system and is programmed for the Axis only.  So if you play against the “bot” you are playing the Russian and Western Allies.  The flow chart is very extensive and covers multiple pages of one of the Aid Charts.

I found the “bot” system to be competently “programmed” but I found that it dramatically slowed down the game as you follow the flow chart and make die rolls to advance towards what the Axis will do.  I found the “fog of war” hat switching method to be the best of both worlds for my play style but the “bot” system is intriguing and I’ll have to revisit it the next time I play solo.

Conflict Cards give you various leaders of different strengths to modify your die rolls during battles.  Strangely the back of the Conflict Cards don’t tell you if they are Axis or Allie Conflict Cards, you have to look at the front of the card to see that.  This makes sorting the cards out if they get comingled a real pain in the rear end.

The Event Cards add in things like Stuka attacks, Me262 Jet Fighters, T34 and Sherman Tanks, etc.  There are no dates on the Event Cards so you may end up drawing an Me262 card in 1941 or 1942.  While the introduction of a Me262 card in to 1942 may seem rather jarring from a technology perspective, the game designers address this temporal paradox by stating that it could represent some other type of advanced fighter interception tactics utilized earlier in the war and doesn’t necessarily have to literally represent the Me262 or the Tiger tank for that matter.

One  thing that did strike me as odd are the conditions that specific types of “big push” attacks such as D Day or Barbarossa must occur in a specific year of the game.  So, for example, if you felt that you could land a D Day operation in Normandy or somewhere else during 1943, the game rules, as written, wouldn’t allow you to do so until 1944.  I felt that this was too restrictive so I set those rules aside and went for broke.  The Western Allies invaded in 1943 and as the Soviets started their operation to push the Germans out of Poland, Ukraine, etc.  We ended the war in 1944 with a German surrender.  They just couldn’t get enough high power cards in their hands to start a major operation to push the Allies and Soviets back.

The huge number of optional rules and play variants means that Hitler’s Reich has nearly infinite replay potential.  No two games will ever play out the same way and if you get board, just add in more of the variant rules!  You do get a lot for your money.

All in all I really enjoyed playing Hitler’s Reich and hope to play it again soon.  While not a perfect game as published, it has the potential to be a real winner if some of the dents are hammered out.  There really is a fine gaming system here if you can just figure out the rules!

Solitaire Rating: 5 (1 is not suitable, 5 is perfect for solo play) 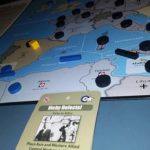 a view of the wooden counters Axis is being squeezed 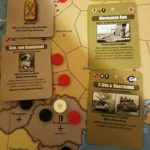 France is being liberated Vichy defects to the Allies