Failed Basic: A little too overwritten. High Price as both expansions could have been in one box and one release. Needs more complete enemy morale and retreat rules.

As the morning fog burns off, a German scouting force comprised of a half track, an 8 wheeled armored car (8 rad) and an anti-tank gun hears Russian motors in the distance. Can they hold the farmhouse they rested at or will their light force be destroyed? As the fog continues to burn off and with motors in the distance, a Sdkfz 8 rad becomes the target of a Russian gun crew who wheeled their gun towards the farm under cover of the fog! Fire is traded. The gun is eliminated by 20mm fire from the 8 rad but the 8 rad takes a hit and is immobilized! The driver of the Sdkfz 251 halftrack speeds towards the 8 rad in order to evacuate the stranded 8 rad crew but something is coming up the road moving in the fog and coming towards the farmhouse! A Russian BT7 tank speeds out of the fog and mistakenly attacks the abandoned 8 rad destroying it. The German 37mm gun crew quickly wheels their gun for a flank shot on the Russian tank lightly damaging it. The damaged tank fires and destroyed the gun. The halftrack crew feels that their position is precarious and the only safety will be found in the fog but can they get away in time before the BT7 takes them out? It didn’t happen. The Russian tank fires a devastating shot at the 251 taking it, its crew and its passengers out. The Russians won the firefight for the farmhouse. So went one of my nail biting play throughs of the solo expansion for Conflict of Heroes.

Academy Games is known for releasing some of the most well designed and beautiful games on the market today. The subjects of their games are diverse and run from the Underground Rail Road to The War of 1812 to Machiavellian dealings in medieval Europe to World War 2. I first reviewed the Conflict of Heroes system in 2011 and I called this gaming system one of the best I’ve ever reviewed.

In 2013, Conflict of Heroes : Awakening the Bear was updated from its award winning 2009 release and I was fortunate enough to review it for Arm Chair General.

In 2016, after several years of no Conflict of Heroes releases, fans now have more releases to look forward to – The Eastern Front Solo Expansion, the Fire Fight Generator, Guadalcanal and a reprint of Storms of Steel!

As I stated in one of my previous reviews “Academy Games was envisioned as an educational gaming company by president and designer Uwe Eickert when he started the company in 2008. After studying the marketplace, Eickert decided to create Academy by releasing extremely high-quality war games. Originally envisioned as rules for World War II miniatures, 2009’s Conflict of Heroes: Awakening the Bear was released with maps and counters instead of miniatures and won both the 2009 Origins Award and the 2009 Charles S. Roberts award for best historical game. Storms of Steel (Conflict of Heroes’ Kursk expansion) and Price of Honour (Conflict’s invasion of Poland expansion) are the second and third in this on-going Conflict of Heroes series and continue the award-winning tradition of the out-of-print Awakening the Bear.”

While the base game had solo rules, the new Eastern Front Solo Expansion adds much more complexity and dynamic scenarios and campaigns to the rules.

It is extremely challenging to provide a solo war gaming experience that doesn’t feel like just random artificial intelligence (AI) movements (I should know – I am the co-designer of Tiger Leader and its expansions for DVG Games and the realistic portrayal of an intelligent, aggressive opponent in a World War II tactical environment has been very challenging to say the least) and few games have succeeded in tackling the tactical World War II ground environment with complete success. My mind keeps traveling to the “Ambush” game series as one that has succeeded.
The Conflict of Heroes Solo Expansion is extremely detailed and utilizes several different components to provide for a nail biting solo experience.

The Solo Expansion contains rules, solo scenario and campaigns, a rule summary sheet, a solo track chart for keeping track of victory points and command action points (CAPs), Order Cards, Rumored Enemy Counters, Cattle and Refugee Counters.
In order to create a realistic AI, the Solo Expansion uses both the Order Cards and the Action Cards which are included in the core game. The player can play either the Germans or the Russians.

While over a third of the 11 page rule book includes examples, the wonderfully illustrated first 8 pages are filled with densely packed information.

The heart of the solo expansion is the Order Card which is used for several different purposes in the game. Each Order Card not only determines the AI’s actions but also is used to figure the priority of the enemy actions based upon several factors including distance to the player’s units, whether they are involved in close combat, whether the AI units are “spent” or “fresh”, whether the AI passes this turn and does nothing, whether the AI engages in low, medium or high risk actions as well as whether a player’s unit is “spent” after it has performed an action. The Order Cards literally have 4 of the 8 pages dedicated to explaining how to use them.

Instead of using Action Points and Command Action Points as in the multi-player version, the player only uses Command Action Points which are used just as they are in the core/multiplayer game to influence die rolls or provide other bonuses. When a player’s unit performs an action such as moving or shooting, he or she compares the action points spent by the action with a randomly drawn Order Card’s AP Spent Number. If the AP Cost of the action is greater than or equal to the “AP Spent Number” on the card, that unit cannot perform any other actions for that turn.

An optional rule attempts to apply fog of war rules to the game and that is where the Rumored Enemy Counters come in. With the fog of war rules in play, Rumored Enemy Counters (REC) are placed on the map. They have a movement of 1 and a minimum fire power and act according to the Order Cards. If one or more of the these three conditions occur – if the REC moves in to the line of site of player’s unit, if it is adjacent to a player’s unit or if is ordered to fire at a player’s unit, then the REC is replaced by a normal counter from an enemy cup which the player creates at the beginning of the scenario. The population of the cup could be either no enemy or a friendly unit or an enemy unit (or a herd of cows or refugees if those rules are in affect). In one game I played, it was night time and I was playing the Russians. I heard a squad coming towards me and thought it may be the enemy but it turned out to be a friendly Russian squad. With these rules in effect, friendly fire can occur until the unit is identified.

The scenarios are well balanced and Academy provides not only stand alone scenarios but campaigns as well.
The rules contain a complete index which is one of my complaints with far too many games.

While the system works very well to generate extremely tense solo battles, the rules are a little too dense and over-written. While the player’s aid charts and the flow charts help, there just seems to be too many rules to remember in order to adequately play the solo expansion without lots of page flipping. At least the rule book is very resilient and printed on sturdy paper. The Solo Expansion will take a great deal of study before the player feels comfortable enough with the rules to set the book aside and play by instinct.

The Fire Fight Generator is a separate but related product. In its box can be found a rule book plus German and Russian Fire Fight Generator Card Decks, Card Record Boards, and Condition Cards. The rule book is only 7 pages long but is very logically laid out and features excellent examples. Compared to the rules in the Solo Expansion, the layout is not overwhelmingly dense.

The Fire Fight Generator can be used for both solo player and multi player games. Each player (if multiplayer) roll initiative, each player shuffles their Fire Fight Cards and then creates their Fire Fight Generator hands. They then take turns playing the cards from their hand that they want to use and that would affect the game. The Fire Fight Cards feature units on the bottom of each card and Special Rules on the top of each card. When the players are out of the cards in their hands, they have created the units and special conditions such as “Well Prepared” which allows the player to draw 2 actions cards each round or “Partisans” which allows for extra units to come in to play to harass the enemy.

In addition, for solo variety, the Fire Fight Generator has complete rules for generating solo scenarios. It also contains special solo command cards which work with the cards found in the Solo Expansion in order to create the proper offensive or defensive solo scenario.

These two rule sets add fantastic and dynamic additional rules to Conflict of Heroes but, I think they could have been combined in to one box. Making them separate products seems to be counter-intuitive.

In addition, while the solo command cards in the Fire Fight Generator add some options for the AI units to retreat, a more complete rule for AI morale and retreat would add immensely to the feel of the game. As it stands now, the AI units fight to the death far to much. While this would work for the Pacific, it just seems that the AI for the Russian Front are far too fanatical and unless the solo command card for retreat comes in to play, the units seem to fight to the death far too often.
None-the-less, these two sets add to the great replay value already inherent in the Conflict of Heroes game system and are a must have for fans of tense World War 2 Conflict of Heroes combat.

Armchair General Rating: 92 %
Solitaire Rating: 5
About the Author
A college film instructor and small business owner, Richard Martin has also worked in the legal and real estate professions, is involved in video production, film criticism, sports shooting and is an avid World War I and II gamer who can remember war games which came in plastic bags and cost $2.99 (he’s really that old)! 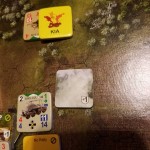