Failed Basic: The sequence of play should have been on a cardstock aid sheet. Needs solitaire rules.

The English Civil War tore Britain in two for 32 years. Beginning with the Battle of Saint Albans on May 22, 1455, it continued until the famous Battle of Bosworth on August 22, 1485, in which the Lancastrian noble Henry Tudor, the Earl of Richmond, defeated the Yorkish King, Richard III for control of the English Crown.

This civil war—the so-called “War of the Roses”—had its roots in the final loss of the last English holdings in France after the Hundred Years War and the grievances of the nobles against a weak and mentally unstable King Henry VI. William Shakespeare’s famous imagery—be it historical or fanciful—of the House of Lancaster picking the red rose in a garden to show support for the Crown, while the House of York picked the white rose to show their break from the Crown is as well known as the Bard’s depiction of Richard III. Shakespeare’s theatrical images are more widely known than the actual battles and bloodshed that accompanied the English Civil War. This new game by GMT seeks to rectify that.

Blood and Roses is the third in Richard H. Berg’s vaunted Men of Iron game series, and it is easily the best of the three. Men of Iron I covered battles from 1298 to 1367 while Men of Iron II Infidel covered the Crusades from 1097 to 1191. Blood and Roses covers battles that occurred much later and introduces such technological advances as troops armed with muzzleloading handguns and teams manning field cannons. Of course, the traditional longbows, swords and pole arms are more widespread and available. The game also adjusts the statistics of the men at arms to reflect the heavier armor of the time, so don’t expect your troops to run around the map – they are heavily armed and armored and slow to move.

The scale of the game is the most intimate of all the Men of Iron series, with each hex representing 50 yards of land and each unit representing from 150 to 250 people.

The game comes with 700 counters, two map sheets with six different battle maps (click link to see two examples), play aids, a rule book and a scenario book. Two dice and plastic zip lock bags are also thoughtfully included. All the books are nicely illustrated and packed with plenty of examples of play.

The rulebook itself is only 20 pages long and is well laid-out and logically presented. An index helps keeps page flipping to a minimum.

Each unit counter is color-coded for its faction and commander, making unit set-up a breeze. Each combat unit is rated for unit ID, Shock Defense Die Roll Modifier, Unit Type (long bow, mounted men at arms, infantry, etc.) and Movement Allowance. The flip side of the unit is its “Disordered” state – that is to say, the state of the unit after it has taken damage. Combat effectiveness of the weapons used by each unit are represented on an easy to understand chart that matches the unit type attacking with the target of the attack and shows the modifiers to the roll of a 10-sided die. Results include No Effect, Attacker Disordered, Defender Retreats, Disordered or Destroyed. Leaders are rated for charisma, command range, activation ratings and movement allowances and these leaders can help influence the fight. Leaders can also be killed or captured, and these losses can have a horrible effect on their troops.

The game is not played with traditional turns. Blood and Roses features a loose turn sequence in which players attempt to keep the initiative through die rolls based upon the leadership ratings of the commanders. The opposing player can attempt to seize the initiative by rolling against his commander’s leadership rating, but if the die roll fails, he gives his opponent a free turn! This makes for a dynamic where both players are constantly watching and plotting.

Casualties subtract from an army’s morale and are tracked on a Flight Point Tracking Chart. When an army’s morale/flight points drop to zero, the army is broken and leaves the battlefield or surrenders.

The ranged weapons can be decisively used to turn the tide of battle. As in previous games in the series, the English longbow rules the battlefield, as it did in real life. Units armed with handguns are much more limited but can be devastating at close range.

Many of the battles devolve into viscous sword-to-sword or pole-arm to pole-arm melees. Especially engaging to me were the fights for the bridges and gates in the 1st Battle of Saint Albans scenario.

In response to some criticisms of previous games in the series regarding scenario balance, Blood and Roses includes optional variants for each scenario, which alter the forces in favor of one side or the other.

Full descriptions of the actual battles are included for each scenario.

This is my favorite of the Men of Iron games released to date. Not only does the smaller scale make each battle much more tactical, but the nature of the battles suits solitaire play much better than in previous games. You won’t find grand cavalry attacks like those in the wonderful Infidel, but you will find tons of down-in-the-dirt sword and shield action.

Nonetheless, the game could use solitaire rules and the turn chart should have been included on a cardstock play aid.

These few flaws notwithstanding, Blood and Roses is a great addition to the fine line of sold out Men of Iron games. Get it before it gets sold out as well. Hey GMT, reprints of previous games? Hint … hint!

About the Author
A college film instructor and small business owner, Richard Martin has also worked in the legal and real estate professions, is involved in video production, film criticism, sports shooting and is an avid World War I and II gamer who can remember war games which came in plastic bags and cost $2.99 (he’s really that old). 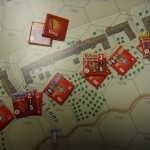 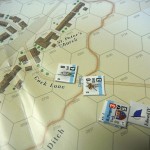 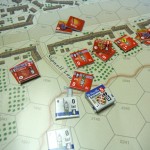