The other day a couple of famed World War II cartoonist Bill Mauldin’s images of his Willie and Joe dogface infantrymen appeared in my in-box, and it reminded me that there was a lot more to the man than just his cartoons that millions of GIs came to identify with. 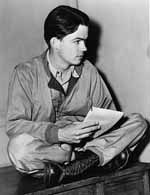 Before he earned renown as a cartoonist, Bill Mauldin was also a fine soldier who was in harm’s way (he was wounded by shrapnel from a German mortar in Italy in 1943) for a good deal of World War II: first in the Mediterranean with the 45th Infantry Division, and later in the European Theater of Operations, where he roamed the front lines to gain ideas and inspiration for his cartoons.

By early 1944 Mauldin was re-assigned from the 45th Division to the GI newspaper, Stars and Stripes, and what had been occasional cartoons in the Forty-Fifth Division News (the first division newspaper to be published during the war), now began appearing six days a week in the Stars and Stripes.

As Mauldin’s Willie and Joe cartoons grew in popularity, the young sergeant became a genuine hero to the GIs and their plight that he depicted so well. Although a number of senior officers thought Mauldin’s cartoons were bad for good order and discipline, the Army’s War Office not only supported their syndication (which meant that they were also published in the United States) but also believed they were a good representation of how tough a war the nation was fighting.

In retrospect it seems hardly surprising that Gen. George S. Patton, with his insistence on discipline as a key to the survival of his troops on the battlefield, would strongly dislike Mauldin’s archetypal GI characters. It was during the Sicily campaign in the summer of 1943 that Patton began complaining about Mauldin’s cartoons.

Patton, who was never known for having a sense of humor, considered Willie and Joe “damned unsoldierly” and demanded that the division commander, Maj. Gen. Troy Middleton, “get rid of Mauldin and his cartoons.” Middleton, who knew Patton well and had a good relationship with him, replied diplomatically: “Put your order in writing, George.” No more was heard on the subject until December 1944 when Patton and Mauldin met during the Battle of the Bulge in what turned out to be an epic encounter between the general and the cartoonist.

As Mauldin’s cartoons began appearing almost daily, they provoked Patton into fits of near apoplexy. He angrily began referring to the Stars and Stripes as a “scurrilous sheet” that subverted discipline. After he complained to SHAEF about Mauldin’s “goddamned cartoons,” Eisenhower’s naval aide and confidant, Captain Harry Butcher, suggested a meeting between the two might defuse the situation.

After thundering that, “if that little son of a bitch sets foot in Third Army I’ll throw his ass in jail,” Patton relented. On the day of their meeting, an understandably frightened Bill Mauldin arrived at Third Army HQ convinced he had been sent on “a suicide mission.”

Patton, who hardly ever wore his many medals and decorations, appeared looking entirely out of character. Here is Mauldin’s unflattering (and somewhat exaggerated) account of what transpired that day:

There he sat, big as life even at that distance. His hair was silver, his face was pink, his collar and shoulders glittered with more stars than I could count, his fingers sparkled with rings, and an incredible mass of ribbons started around desktop level and spread upward in a flood over his chest to the very top of his shoulder, as if preparing to march down his back too. His face was rugged, with an odd, strangely shapeless outline; his eyes were pale, almost colorless, with a choleric bulge. His small, compressed mouth was sharply downturned at the corners, with a lower lip which suggested a pouting child as much as the no-nonsense martinet. It was a welcome, rather human touch. Beside him, lying in a big chair, was Willie, the bull terrier. If ever a dog was suited to his master this one was. Willie had his beloved boss’s expression and lacked only the ribbons and stars. I stood in that door staring into the four meanest eyes I’d ever seen.

They made a heck of a pair: the twenty-three year old, baby-faced sergeant and the profane general. Mauldin gave Patton his best parade ground salute, and Patton rose to offer his hand. In one of the war’s most comic scenes, Willie, likewise rose with his master – and promptly fell off his chair!

Patton told Mauldin to sit, and he took Willie’s place. “The dog not only looked shocked now but offended. To hell with Willie. [Harry] Butcher had been right. This was going to be O.K.”

Hardly. Mauldin’s pen had always been unsparing, whether skewering the brass or the military police, and it caused Patton to launch into a tirade about “those goddamned things you call soldiers,” insisting Mauldin made American soldiers look “like goddamn bums.”

The longer he spoke, the greater Patton’s ire became. He demanded: “What are you trying to do, incite a goddamn mutiny?”

The disconnect between the two was that they were each soldiers fighting entirely different wars. As Mauldin put it: “What made Patton choleric was the way Willie and Joe looked. Scruffy. Disheveled. His own Third Army troops were clean-shaven, boots polished, neckties in place. Why, he sputtered to the Supreme Command, should Stars and Stripes star Willie and Joe?”

Waving a batch of Mauldin’s cartoons, Patton complained that he was ruining morale: “The Krauts ought to put a medal on you.”

Patton then launched into a lengthy dissertation about armies and leaders of the past, of rank and its importance. “Patton,” recalled Mauldin, “was a master of his subject … I felt truly privileged, as if I were hearing Michelangelo on painting. I had been too long enchanted by the army myself … to be anything but impressed by this magnificent old performer’s monologue. Just as when I had first saluted him, I felt whatever martial spirit was left in me being lifted out and fanned into flame.”

To Mauldin, Patton’s monologue seemed to encompass four thousand years of military history. He had barely reached the Hellenic wars when Mauldin unconsciously reached out to scratch Willie’s ear, but wisely stopped, later noting that it would have been his working hand, and convinced that with one snap of his jaws, Willie could have accomplished what Patton would have welcomed: to put him out of business. Whenever Patton growled, Willie had bristled, as if ready to carry out his master’s bidding.

The meeting, which consisted primarily of Patton’s monologue, went on for about forty-five minutes. In all, Mauldin was given less than two minutes to present his own views.

When the two parted, agreeing to disagree, Patton said: “You can’t run an army like a mob … All right, sergeant, I guess we understand each other now.”

Mauldin was grateful to escape from both Patton and Willie (who then reclaimed his seat), and appreciative that he had not become Willie’s lunch.

In truth, and what Mauldin didn’t know, is that Willie’s stern-looking countenance was nothing like his true nature, which more closely resembled that of a good-natured pussycat.

It was inevitable, of course, that Mauldin and Patton would never see eye-to-eye. In his postwar book, The Brass Ring, Mauldin noted that despite what Patton thought, he was neither anti-officer nor against discipline: “If you’re a leader, you don’t push wet spaghetti, you pull it. The U.S. Army still has to learn that. The British understand it. Patton understood it. I always admired Patton. Oh, sure, the stupid bastard was crazy. He was insane. He thought he was living in the Dark Ages. Soldiers were peasants to him. I didn’t like that attitude, but I certainly respected his theories and the techniques he used to get his men out of their foxholes.”

In the end, it was Mauldin who had the last word after his great encounter with George S. Patton. In 1945 he won a Pulitzer Prize, and Willie (the soldier) appeared on the cover of Time, leaving Patton sputtering over Bill Mauldin’s “goddam bums.”