In the Skies of Forgotten Courage: The RNAS and RAF in the Adriatic and Albania 1917-1918 – Book Review.

Mention Great War aerial combat and most people immediately think the conflict over the Western Front and pilots such as Ball, Bishop, Fonck, Udet and Von Richtofen. Back in the day my education on the history of air power left you with the impression that the air started at the North Sea and ended at Switzerland. While the Western Front was an important conflict, the war in the air was present almost everywhere that the war was fought. Unfortunately, there’s been a dearth of material on the actions in many of these theaters.

But that situation is changing, in no small part due to Andrea Casarrubea’s 2018 book “In the Skies of Forgotten Courage”. The monograph focuses on the activities of the Royal Navy Air Service and later the Royal Air Force in the southern Adriatic Sea and Albania in the war against the Austro-Hungarian and Ottoman empires.

The book takes a chronological approach to these activities and includes an assessment of the enemy situation, the rationale for dispatching forces to the theater and the stand up and activities of the men and planes assigned to the theater. Far from the western front, this campaign saw a diverse mix of aircraft by the RNAS/RAF starting with cast off aircraft but eventually utilizing state of the art planes from British and Italian sources.

The book is packed full in information on defensive air patrols, anti-submarine warfare patrols, general reconnaissance and bombing missions. While the Adriatic and Albania may have been something of a side show Andrea Casarrubea conveys the important work done by these brave aviators of all the participants.

Aside from the excellent text, the book is lavishly illustrated with black and white photographs of the men, equipment and places important to the campaign. An abundant supply of vintage aerial photographs conveys the look and feel of many of the port cities and air bases used by all participants. Beyond the air photograph imagery is a robust cartographic portfolio that aids in putting actions in context and understanding the relationship of place on both sides. In addition, scattered throughout the text are a number of color images featuring profiles of aircraft used by the warring parties.

When I first started leafing through the book, I found it hard to put down. It felt like every time I turned a page, I was learning surprising new facts that challenged my pre-concepts of the history of the campaign. This book is an excellent synthesis of information that’s not easily accessible to the lay audience. The narrative goes beyond documenting unit events by the perspectives of many individual participants. Loaded with appendices, this is an essential resource for anyone wishing to gain a solid background in the activities of the RNAS/RAF in the Adriatic Sea and the general war in the air over the southern Adriatic.

In the Skies of Forgotten Courage can be purchased either direct from Aeronaut Books (aeronautbooks.com) or via the print on demand (POD) service of amazon.com

Ray Garbee has been a gamer for the past four decades, Ray’s interests include the Anglo-Sikh Wars through the conflicts of the 20th Century and beyond but his passion remains ACW naval gaming. Currently, Ray works as a Product Manager in the IT field while continuing to design tabletop games. His past works include Iron Thunder, Anaconda, Anaconda: Capital Navies and articles in a number of defunct hobby magazines. When not busy gaming, Ray enjoys working on his model railroad, hiking and sport shooting at the local range. 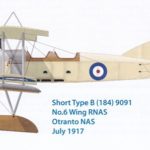