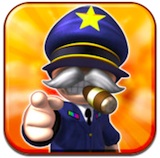 Failed Basic:  Skirmish AI is a pushover.  No map creator.

When Advance Wars was released for the Game Boy Advance twelve years ago, turn-based strategy fans breathed a collective sigh of relief. Finally, someone was hearing their call for a quality turn-based wargame experience in portable format. Now, with the iPad and iPhone increasingly becoming the portable gaming devices of choice, independent developers are once again making grognards happy by turning out some pretty cool experiences. It must be noted that since release, Great Big War Game has become available in a Windows version via Steam, so those without an iPad or smartphone can still check it out!

Great Big War Game, or GBWG from here on out, is the sequel to Great Little War Game, and plays very much like Nintendo’s Advance Wars—complete with tactical gameplay that is mixed with a more colorful, even whimsical, visual style. Much like how Gameloft picks up the slack of big-name publishers by making portable experiences similar to PC and console shooters and RPGs, Rubicon Games is answering the call to scratch gamers’ turn-based itch. Granted, GBWG does not have some of the tactical choices of Advance Wars due to the lack of Commanding Officers to lead your armies; Nintendo’s title allowed the use of special abilities that could turn the tide of a battle.

In a typical game of GBWG, each of the two sides has a headquarters that must be protected. Other structures such as barracks and construction yards are used to train units; oil derricks produce income each turn. The player must race around the hex-based map to take control of these structures (captured by engineer units) to increase income each turn and bring units closer to the front lines, as well as to deny the enemy use of these structures. Units include all the air, land, and sea staples like riflemen, snipers, bombers, and destroyers. Each unit has several stats that affect combat potential, including movement points, sight range and damage. Also, some units simply don’t perform well against others, so trying to pit a sniper against a tank will result in a pitifully ineffective attack. It is a very rock, paper, scissors approach to combat that wargamers are used to from games of this type. It is extremely simply to learn, and the early campaign missions serve as great tutorials.

For Advance Wars veterans, there are a couple of differences that GBWG introduces. The hex-based map has elevated terrain, albeit only one level, which when utilized enables units to see and shoot farther. The key gameplay difference between AW and GBWG, however, is that units in GBWG can still move after being trained or after boarding a sea, land, or air transport. In Advance Wars, and some other turn-based wargames I’ve encountered, the unit would have to wait until the next turn to move. Being able to perform multiple actions per turn gives GBWG a much faster feel, as each structure can pump out multiple units per turn if the player has the funds.

GBWG comes with a meaty single-player campaign. Its missions do a good job of switching up the normal “kill everything” objectives with ones such as assassinating enemy generals or defending a base. There is also a strong selection of skirmish/multiplayer maps. While there are no AI difficulty settings if you wish to play the maps solo, you can adjust the starting and per-turn credits for either side to provide a handicap. The only problem is that as of now, the skirmish AI is a pushover, failing to adequately defend its headquarters or properly mix units to mount an offense. Therefore, those that desire replayability outside of a campaign and multiplayer may want to wait and see if this is improved. The weak AI is not an issue in the campaign because the missions are tightly designed to provide a challenge.

There are no randomly generated maps and no editor (a great feature of Advance Wars that I hope Rubicon considers adding in this or a future installment), but additional map packs can be purchased at a reasonable price, adding close to fifty maps. Each of the two map packs available also includes an additional unit (a flame tank and a medic).

Multiplayer options include pass and play, as well as asynchronous multiplayer, which means you don’t have to play an entire game in one sitting. Simply upload your next turn at your leisure and wait for your opponent to do the same. I was able to get multiple games going very quickly against random opponents (players of the IOS, Android, and Windows versions can all play against each other). When playing multiplayer, however, I did find a game exploit that may or may not have been left in intentionally. After moving a unit, you are able to take back your turn. The only problem is that before doing so your unit reveals the fog of war on the map. Therefore you can send units out to essentially scout for free. The fog of war does return when you undo your move, but you can remember what you saw when it was revealed. One simply has to accept this as a strategy or have the discipline to not utilize it. But will the enemy be so honorable?

GBWG‘s 3D graphics are charming, and fit with the whole “War is fun!” feel of the storyline and mission briefings (the game’s vibe reminded me of the classic Cannon Fodder). The whimsical military style music and effects are great. Tapping and ordering soldiers around result in them belting out mock military bootcamp training songs—a nice touch.

And that is what GBWG excels at. It rounds out the essentials of a turn-based combat game with little touches that add another layer of challenge. Pickups dot the campaign missions and can be collected to earn extra battle points with which to purchase upgrades for unit classes. The placement of these pickups is designed to test your unit and time management skills, as you must balance dealing with the enemy and collecting these goodies.

My initial reaction to GBWG was one of utter bliss. The campaign missions are a blast and the mechanics of the game are as sound as anything out there. After long-term play, the AI weakness turned me off a little, and my recommendation goes from a must buy to a more reserved recommendation. If the campaign and multiplayer will satisfy you, definitely go for it. If the weak skirmish mode is a turnoff, well … the campaign is still a lot of fun, but when you’re done with it, solo play suffers. You can, however, replay any campaign mission to see if you can beat your best number of turns.

Rubicon has a solid thing going, and with some AI improvements the next outing could be the greatest, and biggest, war of them all.

About the Author
Anthony Micari graduated from New York University with a degree in history. He runs a business, is an avid reader, and plays of all manner of games ever since getting his start on a Commodore 128. He has also published in Wargamer.