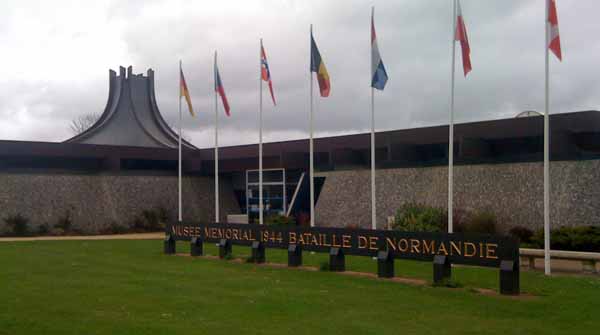 The Polish reunion dinner in Argentan, France was memorable. There were forty or fifty veterans in the restaurant as they relived old friendships and celebrated life. Given what most had endured during their World War II service in the Polish 1st Armored Division, they had plenty to celebrate.

Copious amounts of food and drink were consumed amid the talk and laughter. I’ve rarely seen more alcohol consumed; yet no one appeared inebriated.

During our luncheon, my wife Shirley was given a brief respite from her tummy problems as she became enthralled with the stories told by these men. All seemed to have known each other before the war as young men in schools in Poland. They had all escaped Poland after the German invasion in September 1939 and, often with great difficulty, had managed to get to England where they joined the Polish free forces being formed in the early years of the war. After the war they had expected to return to a free Poland, but those hopes were dashed when, instead of a democratic state, Poland became communist. Their stories were all of educated men who conversed in four or five different languages.

What was so impressive was that this great group of sophisticated and educated people was so energetic and passionate about life and living that it was hard to tell their ages. Despite being stateless they had succeeded in their chosen fields. Indeed, some like Zbig and our host in London had become wealthy and lived a good life in England.

In 1939 Poland sent their cavalry units to engage the tanks of Hitler. Many of these men had been great riders and horsemen. Zbig was not alone in his passion for horses. One man had stayed in England as a thoroughbred racehorse trainer and had done very well. In fact, he had come to the attention of a Sheik in Dubai who was so impressed that he hired him to train all his international horses. Now this man lived and trained in England and traveled the world with his expensive racehorses.

Zbig, as we later learned, was also a very daring equestrian who liked to gallop fast and jump high fences. He had participated in the rescue of the Polish Arabians of the National Stud of Poland near the end of the war and was awarded one of their gorgeous grey Arabian stallions for his efforts. He showed Shirley a photo of him riding this stallion in England, jumping a five-foot fence. In the 1980’s the Polish Arabian industry in America was selling horses at auction in Arizona and California for $250,000 and upwards to a million dollars or more.

By helping to save this rare breed Zbig and others saved not only an historical legacy of their Polish culture but also an endangered breed that was irreplaceable. These horses and the famed Lipizzaner stallions of Vienna are still with us today thanks to the actions of these men and others like them.

At the dinner another guest of the Poles came over and introduced himself as a friend of historian Martin Blumenson. He too had read Decision in Normandy was glad for the opportunity to meet my wife and I. Dr. Jean-Pierre Benamou’s day job is that of an oral surgeon.

He invited Shirley and I to have lunch with him two days hence. We were to meet him at a restaurant in a small village near the D-Day invasion beaches. At the appointed hour we arrived at the restaurant, which was situated in what appeared to be the deserted courtyard of a rural farm. At first we thought we must be in the wrong place, but were greeted by Dr. Benamou who had been awaiting our arrival. We were treated to a superb meal on a long table. Spread before us were many choices, including lobster tail and a delicious roast cooked in an open stone oven. What was so unusual was that the restaurant was normally closed on this day but Dr. Benamou had arranged for the restaurant to be opened just for us to be able to dine with him.

During the meal Dr. Benamou explained how he had, virtually single-handedly, founded and was the director of the Musee Memorial de la Bataille de Normandie, situated on the by-pass road on the outskirts of the ancient city of Bayeux, not far from the famous Bayeux tapestry. Born in the city of Caen in 1945, Dr. Benamou has always had a deep interest in the war, and was determined to translate that interest into a living monument to the battle and the Allies who liberated Normandy.

Dr. Benamou created the museum without the aid of a single centime of public money. The museum is a recreation of the battle of Normandy that over the years has attracted thousands of visitors. When we later toured the museum we saw what a remarkable legacy he has created.

Dr. Benamou has also made it his mission to help find and recover combatants still missing from the war and in that regard he has had amazing success, including being instrumental in locating the remains of the legendary German panzer ace Michael Wittmann and his crew. Dr. Benamou had arranged for aerial views to be taken of the terrain to distinguish irregularities in the fields, and had discovered the resting place of Wittmann’s tank that had become buried in the soft earth of the Caen-Falaise plain. As a result, the bodies of Michael Wittmann and his panzer crew were recovered and given a military burial in the German military cemetery at La Cambe.

One morning, on an off-day during our week in Normandy, Zbig asked us if we’d like to accompany him on a journey of remembrance: he was going to try and recreate the same route his unit had taken forty years earlier during its battles in August. His job in 1944 had been in the tank crew of a recon unit. (See You Command, “Polish Motorized Infantry Attack, 1944” in the November 2013 issue of ACGwhich features an August 1944 Polish 1st Armored Division combat action.)

Zbig’s Rover automobile had developed mechanical trouble and was at a nearby garage being serviced, so we used our rental VW Golf that had no a/c on what proved to be one of the steamiest days of the summer.

Before long we were driving along the back roads and country lanes of the plain in search of a place where his unit had first engaged the Germans. At his direction I drove along a narrow road that was scarcely more than a dirt trail until we came to a large field. His remarkable memory had brought us to a place where he first came under enemy fire. It was an eerie feeling to realize that four decades earlier some of the most savage battles of the Normandy campaign had been fought on this plain, which was now peaceful farmland.

After lunch at a local bistro, mercifully out of the heat for a time, Zbig directed me into the hill country east of Falaise. When we came to a four-way road junction he had me stop the car while he examined the road signs. “Yes,” he said, “this is the right place.” At about 4:00 a.m. that day in August 1944 his unit was approaching the road junction when a column of German vehicles suddenly appeared from the west. It was elements of the retreating army from the Allied envelopment that threatened their encirclement.

The German convoy thought the Poles were another of their units and benignly began drifting through the intersection when the Polish tanks opened fire on them. Caught flatfooted, the result was bloody and very deadly.

After the dust settled the Poles moved on but they took the wrong road. As Zbig pointed out the signs in 1944 were reversed – and in 1984 they were still reversed!

We crossed the intersection in the direction taken by his unit in 1944, and as we drove he told me about a farmhouse that should be just ahead that had the outline of a white horse in front. When the Poles came to the farmhouse they saw an amazing sight: hundreds of exhausted Germans were sleeping in the fields of the farm. With guns blazing they charged into the farm as Germans scattered in all directions in flight. Later they found the distinctive pants of six general officers that had been left behind as they fled into the dawn.

Suddenly, there was the farmhouse with the white horse. We drove into the farmyard and for the next hour I experienced one of the most unusual events of my life. Hearing our arrival, an elderly man in his 80s came out to see who we were. In excellent French, Zbig explained that he had been a Polish soldier and asked had he been the owner of the farm in 1944. The farmer’s eyes lit up at this news and he graciously invited us into his home where we met his elderly wife. The kitchen was old and very dark. The walls were dark with soot and strips of flypaper hung from the ceiling but primitive as the place was, the reception we received was warm and friendly.

They told us how when the Germans unexpectedly arrived at their farm they fled into a nearby field and hid until the Poles arrived. To this day I can vividly recall not only their humble surroundings but also their great dignity. They were simple folk unexpectedly caught up in the maelstrom of war. Both Zbig and I were deeply moved by our meeting with the French couple.

During our daylong sojourn through the Norman countryside Shirley’s tummy condition had come back with a vengeance. I thought we should cut short our trip and return to the hotel but she would not hear of it and insisted we continue. At the French farmhouse she remained in the car but to this day I still marvel at her resilience and unwillingness to disrupt Zbig’s journey back into history.

Within a short time of leaving the farmhouse Zbig directed me to the summit of Mt. Ormel, the site of one of the most desperate battles of the Normandy campaign.

Next month a Polish reunion on Mt. Ormel and the story of the battle.